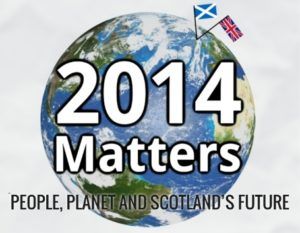 In 2014, in the run-up to the Scottish Independence Referendum, we joined forces with a range of organisations across Scotland to explore what Scotland becoming an independent country or remaining as part of the UK might mean for the environment, poverty and global justice.

Together we organised a series of public events with thought-provoking and prominent writers, thinkers, campaigners and politicians to challenge both sides of the debate, focusing on five topics.

The Energy, Environment and Climate Change debate which we organised took place in Glasgow on Wednesday 18th March. Speakers on the Yes side were Scottish Climate Change Minister, Paul Wheelhouse MSP (SNP) and the Scottish Greens’ Co-Convenor, Patrick Harvie MSP.  The No side was represented by former Environment Minister, Sarah Boyack MSP (Labour), Leader of the Scottish Liberal Democrats, Willie Rennie MSP.

Other events in the 2014 Matters series were: Justice in Foreign Policy, Immigration and Human Rights; Poverty, Power and Inequality in a Changing World; Economic Justice and Scotland’s Future; and Scotland’s Place in Building a Just World.