We Want to See Double

In autumn 2013, we campaigned for a significant increase – in fact a doubling – of the budget for cycling and walking, the lowest-carbon forms of transport.

The Scottish Government had recently “acknowledged and accepted that [they] need to do more to encourage cycling” and announced additional funding for cycling. However much more investment was needed for Scotland to become the low carbon country it aims to be.

We called for the Scottish Government to double the current budget for cycling and walking for the next year and every year. Our campaign highlighted that levels of funding for cycling and walking must continue to increase between now and to 2020, when at least 10% of the total transport budget should be allocated to this. The national budget for active travel (i.e. cycling and walking) at that time was £20m each year (just 1% of total public spending on transport in Scotland). We were calling for Government to go further and commit to spend at least £40m each year for the next two years.

Our campaign highlighted the considerable benefits of increasing journeys taken by bike or on foot rather than by car, including safer streets, improved air quality and improving peoples’ physical and mental health.

In April 2014, Scottish Government announced an additional £15m of funding for cycling and walking for the next year. 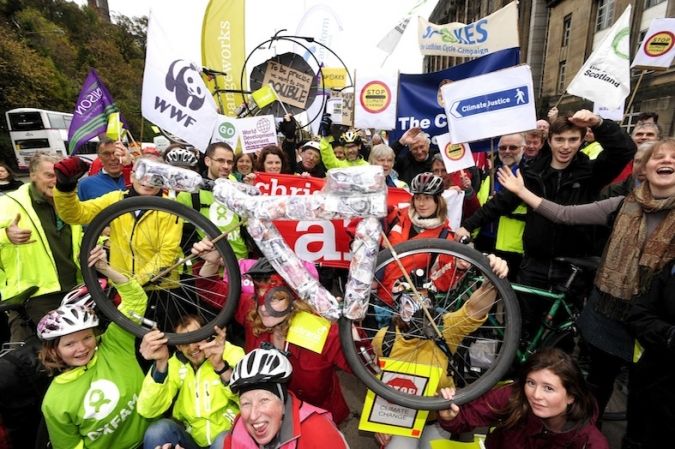 This work was a follow-on from our On Yer Bike campaign in 2012, which again recognised the considerable impact of transport on Scotland’s greenhouse gas emissions and called for Government to increase the proportion of the Scottish Budget being allocated to low carbon transport. In 2012, after various activities including a rally outside Scottish Government offices, a further £13m was allocated to active travel i.e. cycling and walking. Later that year, the first ever Pedal on Parliament took place.