People in Scotland are concerned about climate change and strongly support greater action across a range of sectors to tackle it, polling has revealed today.

The survey carried out for Stop Climate Chaos Scotland by YouGov comes as the world’s leading climate scientists – the UN’s Intergovernmental Panel on Climate Change (IPCC) – gather in Edinburgh this week. The IPCC delivered last year’s landmark warning about the urgent need to rapidly change our economies and societies to avoid increased warning.

The IPCC’s visit comes as MSPs prepare to debate the Scottish Government’s Climate Bill for the first time on Tuesday 2 April. The Bill has been heavily criticised for failing to significantly increase ambition in the crucial period between now and 2030. Ahead of the debate, climate activists will hold a “Running out of time” themed rally outside Scottish Parliament.

“Climate change will do irreversible damage to our planet if we don’t do more to tackle it now. This new polling shows that people in Scotland recognise the seriousness of the situation and want more action to reduce greenhouse gas emissions.

“Last year, UN climate scientists published a landmark report which highlighted the alarming rate at which our climate is changing. That report underlined that if levels of emissions continue at current rates, the risks posed to people and the planet would be truly catastrophic.

“As 200 leading UN scientists from around the world gather in Edinburgh this week, MSPs at Holyrood must take note of the growing clamour for urgent action on climate change. Mounting scientific evidence from world experts, alongside increasing levels of public support mean Scotland’s new climate law must rise to address the scale of the crisis presented.”

“People in Scotland are right to be increasingly concerned about climate change. Across the world, we are already seeing communities ravaged by fire, floods and storms like never before. Despite doing least to cause it, climate change is hitting the world’s poorest people hardest, forcing people from their homes and increasing hunger. Worryingly, climate change makes extreme weather events, like the devastating Cyclone Idai in Mozambique, Malawi and Zimbabwe, much more likely.”

“As a nation which has historically profited from fossil fuels, Scotland has a duty to act with greater urgency when tackling climate change and it’s hugely encouraging that people support faster action. Humanity needs bold, brave leadership and action right now – and Scotland has the chance to show genuine leadership.”

“It is therefore clear that in tackling climate change we must avoid further harm and, wherever possible, also help nature. We need to make sure that developments intended to tackle climate change minimise their impacts on wildlife, and we need natural approaches to help protect us from the worst effects of climate change. For example, we need to create natural flood defences and provide more space for wildlife in our countryside, our urban areas and our gardens, to help soak up increased rainfall and provide shelter from sun and wind for wildlife and people.”

The 2018 report by the IPCC found that limiting global warming to 1.5°C would require “rapid and far-reaching” transitions in land, energy, industry, buildings, transport, and cities.

Speaking then, he emphasised the benefits of early action in terms of cost, saying: “everything that you do now will buy you benefits further down the line” and confirmed there were cost savings associated with early action.”

Regarding when Scotland should set a net-zero target date, he said “…it would be suggested that a country such as Scotland should probably aim for something a little earlier than the 2040 to 2070 bracket in order to make a reasonable and fair contribution to the global aim of net-zero.”

Previous Story:
Blog: Climate science says we all must do more, faster 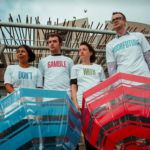