In Madrid, at COP25, the climate action is outside the negotiation rooms

New evidence has been presented by experts on a range of gaps. A UN Emissions Gap Report points out that current global action is only sufficient to keep average global heating to 3 degrees, with disastrous and far-reaching consequences for people and nature, and twice the 1.5degree warming goal that political leaders have coalesced around. Here at the climate talks, countries in the Global South have been demanding increased funding to deal with the consequences of climate change they are already living with, to bridge a funding gap. And a Production Gap Report shows the world is on track to produce far more coal, oil and gas than is consistent with limiting warming to 1.5°C or even 2°C.

But the biggest gap here is an action gap. A yawning gap between the action being taken outside of the climate conference, COP25, and the slow progress of negotiators inside. On the one hand people are taking to the streets, and taking new climate action in their own lives, democracies, businesses and economies. On the other, climate change negotiations between countries are proceeding slowly. As things stand, COP25 in Madrid will not be the strong springboard to increased, joint global climate action.

One ray of hope here has been from regional, city and local governments. On Wednesday Karolina Schmidt, the President of COP25, announced that alongside the 73 countries planning to increase their climate ambition and action during 2020, there are now 14 regions, 398 cities, 786 businesses and 16 investors working towards achieving net-zero CO2 emissions by 2050. The UK, Scotland and Glasgow, the three tiers of government that will host the next major global climate conference in Glasgow in 2020, are all represented. Also on Wednesday, the Global Covenant of Mayors was relaunched, updating the world on the action that over 10,000 cities and local governments are taking to respond to the climate crisis.

Around the world, there are cities and local governments getting on with dealing with the climate emergency. In Scotland, the Scottish Government and local government leaders have set out that they understand the need to respond with urgency. We have already made great progress in rapidly reducing the climate pollution caused by electricity generation – 75% of our electricity needs are now met from renewables. But to accelerate Scotland’s response to the climate emergency, we need to increase investment and action to rapidly eliminate other sources of climate pollution – from how we heat our homes, travel around, and from where our food comes from.

And as we look forward to Glasgow’s hosting of the climate conference next year, we should expect our cities, like Glasgow, and our governments, to lead the way. There is a global community of national, sub-national and local governments acting on climate change. They may not be represented within the closed negotiation rooms, but COP26 in Glasgow is an opportunity for Scotland to work with like-minded states and regions that want to get on with the task of responding to the climate crisis, and building a better future for their citizens. 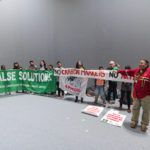 Previous Story:
Carbon markets are not the answer to the climate crisis

Next Story:
The power of hope