Commenting on the UK Committee on Climate Change’s (CCC) report, Stop Climate Chaos Scotland (SCCS) – a diverse coalition of over 60 organisations in Scotland campaigning together on climate change – welcomes the overall emphasis on the need for immediate action, and agrees that emissions will not be cut by ‘strategies alone’.

Regarding the Scottish Government’s Climate Change Plan update (CCPu), the CCC report notes that it has ‘not been able to establish whether and how policies and proposals in the CCPu add up to the required emissions reductions.’ We agree with the recommendation that the Scottish Government should publish ‘as soon as possible, a detailed and transparent quantitative breakdown of how the announced plans will achieve the sectoral pathways to which it has committed’.

Furthermore, we welcome the prioritisation of faster action regarding travel demand, heat in buildings and agriculture. We note and support the proposals that the Scottish Government should go further and faster in relation to peatland restoration, healthier diets and aviation demand.

In order to reach Net Zero emissions, the CCC report discusses the existing reliance on greenhouse gas removal (GGR) and urges the creation of a ‘Plan B’ on the basis these do not materialise. SCCS has expressed great scepticism about these negative emissions technologies as there is no evidence that they will work at the scale required. Thus, we agree with the CCC’s conclusion that ‘clear contingency plans will have to be developed for meeting the 2030 target if it should turn out that GGR cannot be delivered at scale on the necessary timetable, accompanied by a clear date – no later than 2023’. That would be the ‘Plan B’ that both SCCS and the Environment, Climate Change and Land Reform Committee committee asked for in relation to negative emissions technologies.

SCCS believes that the proposed Cambo oil field, west of Shetland, is not compatible with Scotland’s climate change ambitions – and the Scottish Government should make a firm stand on this, asking the UK Government to refuse it. The CCC report indicates that ‘there remain questions over the compatibility of new fields for fossil fuel production in the North Sea with UK and Scottish climate ambitions’.

SCCS continues to press for urgent action from the Scottish Government to meet our targets for emissions reductions and for climate justice around the world.

“This report from the UK Committee on Climate Change confirms the need for immediate action, and comprehensive plans to 2030, to reduce Scotland’s emissions and address the climate emergency. This is critical, with the Head of the Committee saying the risks of failing to meet Scotland’s 2030 emissions cut target ‘really stacking up’.

“The Scottish Government has missed the last three annual emissions reduction targets. To be a credible champion of climate action, the Government must get firmly on track to deliver all future targets with no more excuses or delay. Progress will be measured by how fast emissions fall, not by ambitious long-term promises.”

The UK Committee on Climate Change published their report, ‘Progress in reducing emissions in Scotland – 2021 Report to Parliament’, on 7 December 2021. 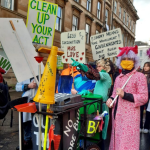 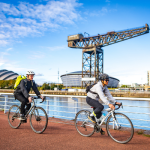 Next Story:
Climate change: Scottish Government still needs to up its game to cut carbon emissions