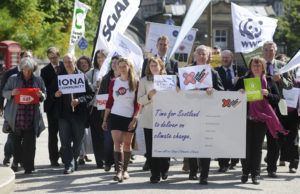 23 senior representatives from Scotland’s largest civil society coalition, Stop Climate Chaos Scotland (SCCS), have today handed a giant postcard to the new Scottish Government urging them to turn manifesto promises into political reality and make action on climate change a priority for the next five years.

Tom Ballantine, Chair of SCCS said:   “Climate change is already having a severe impact on people and nature around the world and it is the responsibility of the next Scottish Government to help reduce that impact by ensuring the fine intentions of our world-leading Climate Change Act translate to a reality.

“Our message to the incoming Government, as well as to newly elected and returning MSPs is simple, it’s now time to act on climate change and demonstrate to other countries that it is possible to not only set tough targets, but to deliver on them.

“SCCS is calling for specific action on its top four priorities for early action in the new session of Parliament:

Next Story:
Cyclists tell Scottish Government to ‘Get on Yer Bike!’