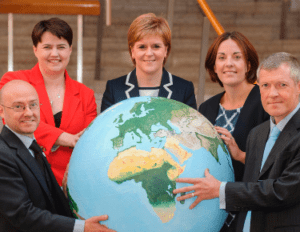 The leaders of Scotland’s political parties including First Minister Nicola Sturgeon came together today to back positive action on climate change.

They took part in a media photo-call, holding a large model of the planet earth to illustrate their commitment to do everything they can to create a healthy planet for future generations. The photo-call included First Minister Nicola Sturgeon, Ruth Davidson (Scottish Conservative), Kezia Dugdale (Scottish Labour), Patrick Harvie (Scottish Greens) and Willie Rennie (Scottish Liberal Democrats).

The event coincided with a special mass lobby event in the Scottish Parliament, organised by the Stop Climate Chaos Scotland coalition, which brought nearly a hundred people from all over Scotland to meet their MSPs. People from all walks of life travelled to Parliament to urge politicians to do more to improve the energy efficiency of our homes and buildings, invest in Scotland’s renewable energy sector and in low carbon transport, and cut greenhouse gas emissions from the food we eat.

Last year the leaders signed a joint promise to set out comprehensive plans on how they will tackle climate change and reduce emissions. Now it’s time for action.

The Scottish Government is due to publish a Climate Plan early next year, setting out their actions to tackle climate change. This is expected to be followed by proposals for a new Climate Change Bill. The mass lobby event is part of a huge movement of individuals and organisations in Scotland demanding that government and MSPs make the changes needed to deliver a positive and lasting difference for the climate.

“It’s great to see the party leaders come out to support more positive action to tackle climate change. The steps they take now will dramatically affect the future health and wellbeing of Scotland’s environment, our homes, economy and the planet our children will inherit.”

“Scotland continues to be a world leader in reducing greenhouse gas emissions, and we not only met the annual 2014 emissions reduction target, but exceeded our 2020 target six years early. We are committed to maintaining our position as global leaders in tackling climate change and will be consulting on a new Climate Change Bill early in 2017.”

“It’s positive to see such consensus on this issue. Each of us has a role to play in tackling climate change and ensuring that Scotland takes steps to reduce emissions. Whether this be through warmer homes or by continuing to invest in clean energy, across the political divide there is broad agreement that we must work to drive carbon emissions down.”

“We all have a duty to leave the world in a fit state for the next generation, and we have to step up our efforts to address climate change. That’s why Scottish Labour backs a ban on fracking and opposes cutting air passenger duty which would increase emissions. Scotland’s political parties can and should work together to deliver a greener Scotland.”

“Scotland must show the rest of the world that we remain willing to fight dangerous climate change by agreeing legislation in line with last year’s Paris conference agreement. Our potential as a renewables leader must now come to fruition. This, coupled with a strong message that fracking is banned in Scotland and that we won’t make aviation taxes lower than they already are, will signal Scotland’s commitment to tackle climate change head on.”

“Tackling climate change is an enormous challenge that no one political party can tackle alone. Working together is vital if we are to cut our emissions and build a greener economy. The future is an all of our hands. The time for action is now. The world cannot wait.” 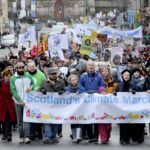