The Cabinet Secretary for Environment, Climate Change and Land Reform, Roseanna Cunningham, today announced that both she and the First Minister will attend the UN Climate Conference in Bonn in November. The announcement was made during a Ministerial Statement on Scotland’s progress against its greenhouse gas emissions targets.

“Stop Climate Chaos Scotland welcomes the participation of both the First Minister and the Cabinet Secretary for Environment, Climate Change and Land Reform at this year’s UN Climate Summit.

“Having made encouraging progress in some significant areas of climate policy, including some promising announcements in the recent Programme for Government, Scotland has much to contribute on this global issue. There are also areas in which we can learn from other countries at the forefront of action against climate change.

“The urgent need for progress makes it all the more important that the Scottish Government engages wholeheartedly at this summit.”

On the emission figures, Ballantine continued,

“Scotland has made good progress against our 2020 targets and we hope that in the upcoming Climate Bill the Scottish Government will continue to show leadership and increase our ambition for the coming decades. Over 18,000 people across Scotland have urged Ministers to be bolder and set a legal target for net-zero emissions by 2050 at the latest.

“Since these figures were first released in June, we have seen significant promises including the phasing out of the need for fossil fuelled vehicles by 2032. We look forward to seeing additional measures to address energy efficiency in our homes and how we cut emissions from agriculture. “

The Statement coincides with the publication today of a new report from the UN, the Emissions Gap Report. This report show that the Paris Climate Agreement, the current global deal on climate change pledges only a third of what is needed to avoid worst impacts of climate change. It emphasises the need for governments, the private sector, cities and others to urgently pursue actions that will bring deeper and more-rapid cuts.

“This report from the UN today further emphasises why Scotland, along with other countries across the world, must increase its ambition on climate change. We call on the Scottish Government to commit to zero emissions from Scotland by 2050 at the latest.” 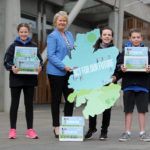 Previous Story:
Over 17,000 call for Scotland to lead on climate change

Next Story:
Connecting the dots for a fairer, greener future