Today, people from all walks of life, from Inverness to Paisley to Aberdeen to Dumfries, joined forces to call for more action on climate change. They called on MSPs to ‘stop gambling with our future’.

Stop Climate Chaos Scotland organised a mass lobby at the Scottish Parliament. Together, people of all ages from across Scotland demanded the Scottish Government takes on board the growing concern about climate change and the urgency needed to tackle it. 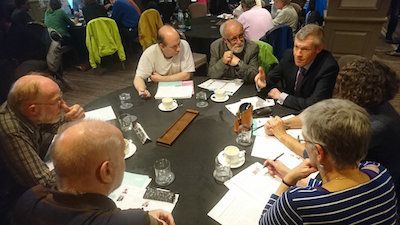 Willie Rennie MSP talks to his constituents at the Mass Lobby.

“It’s inspiring to see people from all over Scotland coming to Holyrood to tell their politicians that more must be done. The committed individuals here today understand the scale of the problem posed by climate change and the importance of getting this right at every level.”

The Scottish Parliament is currently considering a new Climate Change Bill. Campaigners say this Bill must be strengthened if Scotland is to play its fair part in achieving the global deal on climate change, the Paris Agreement.

In addition to calling for net zero greenhouse gas emissions by 2050 and a 77% reduction in emissions by 2030 (compared to 1990 levels), SCCS wants the Climate Change Bill to require Government to align Scottish Budgets with climate change ambition. SCCS is also calling for the Bill to include policies to tackle our worst emitting sectors including a nitrogen balance sheet for farming by 2020 and making Scotland’s homes more energy efficient by 2025.

Gail Wilson continued: “It’s clear this summer’s extreme weather events have made climate change much more real and urgent for many people. Scotland now needs to join with other countries across the world and commit to reducing emissions faster and prevent even more devastating climate impacts for people across the world.”

“The Climate Change Bill proposes a 90% cut in greenhouse gases by 2050. But scientists have told us this is not enough to prevent the worst impacts of climate change. International experts have confirmed that richer economies, like Scotland and other European countries, will have to reduce our greenhouse gas emissions to net zero by 2050, and that our emissions must half each decade between now and then.”

Gail Wilson added: “Scottish Government tells us their climate plans go as far as is technically feasible. But Scotland has already reduced our greenhouse gas emissions by 45% compared to 1990 levels, achieving ahead of schedule the ambition set in 2009, when our current Climate Act was passed at Holyrood.”

Mary O’Brien, Houston, Renfrewshire said: “As the grandmother of five gorgeous children I am extremely concerned about the impact of climate change on their lives.”

“Our greatest challenge is to meet the needs of all people within the means of the planet and we are currently failing to do this on both counts. In our pursuit of economic growth we are neither meeting the needs of the poor or preserving the planet for future generations. The full consequences of this are likely to be played out in the lifetimes of my grandchildren and this is why I urge the Scottish Government to go further and adopt the recommendations of Stop Climate Chaos Scotland.”

As part of the mass lobby people were also invited to take part in a photo call. They wore T-shirts with the words “Don’t Gamble With #OorFuture” to send a strong message to those in power.

Duncan Logie, Youth Worker said: “Younger generations like mine will be most impacted by the decisions made by those in power now. We need politicians to stop gambling with our future and do what is necessary to protect our health and our planet.”

Previous Story:
Quantifying the implications of the Paris Agreement: What role for Scotland?

Next Story:
New report calls for ‘decisive and urgent’ action on climate change from Scottish Government