Scots tell First Minister why they care about climate change 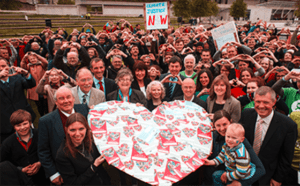 Campaigners today showed the First Minister some love outside the Scottish Parliament.

Stop Climate Chaos Scotland (SCCS) handed over thousands of postcards addressed to Nicola Sturgeon detailing all the things people care about that are threatened by climate change.

The ‘For the Love of’ campaign encouraged people across the country to let the Scottish Government know they want delivery on Scotland’s climate commitments and to push for leadership on climate change internationally.

“The ‘For the Love of’ initiative has really focussed the minds of people across Scotland on the things they care about that could be affected if we don’t take urgent action on climate change.  For me it’s my love of wild land, for others it’s Scottish landscapes and someone else it’s communities in the developing world.

“It’s great to see so many people turn out today to tell the First Minister that they expect Scotland to  not only reduce its emissions but also that the Scottish Government shows leadership internationally.

“This is an important year for the climate with world leaders meeting in Paris in December to agree a deal to contain climate change and to curtail its effects, not only on our lives, but also those of people in more vulnerable areas of the world.”

SCCS is also supporting members of the public from across Scotland to travel to London on 17 June to meet their new MPs at Westminster and ask them to push the UK Government to take action on climate change.