Climate campaigners across Scotland are finding the enforced challenge of moving online is helping them build links beyond traditional borders and foster creative ways to involve more people.

The Climate Fringe is a new initiative to bring together the huge array of events and activities planned to take place across Scotland in the run up to, and during, the UN Climate Talks in Glasgow – known as COP26. These critical talks may have been delayed a year due to coronavirus, but in the first month the website has been live, more than 100 events have been uploaded.

Online initiatives featured on www.climatefringe.org include:

Kat Jones of Stop Climate Chaos, the coalition of civil society organisations which is supporting the Climate Fringe initiative, commented,

“Coronavirus meant that we needed to think differently. But as soon as we took the plunge and shifted the Climate Fringe from offline events into an online events hub, it all fell into place. There is just so much going on, and the events started flooding in.

“Attendance at the online events has been really high, and we are getting interaction from not just Scotland and the UK, but from across the world – that’s key because we need to hear the voices of those most impacted by the spiralling climate crisis.”

Back in February Stop Climate Chaos Scotland were preparing for a frantic countdown to the climate talks, scheduled to be held in Glasgow in November 2020. But when the UN decided to delay by 12 months, a rethink was needed.

ÚNA Festival, which takes place next week, is a case in point.  This Glasgow-based arts festival is all about linking artists in Latin America and Scotland and has a focus on stories, myth and art, and how they connect us with the natural world.

Isabella Noero, the director of ÚNA, who is originally from Colombia, said,
“We found that moving the festival to online had its challenges, but we have also been able to bring in more artists from Latin America, and from less accessible locations, to the digital edition of the festival, while opening it up to audiences all over the world.”

2020 is the year is the Scottish Year of Coasts and Waters and ÚNA takes up this theme for the event which launches on Thursday 23th July on their unafest.com platform.

“We are living in times where, under strict quarantine measures, the most direct contact to the natural world for many has been water. We will have music, arts and storytelling to transport us through different traditions and geographies: from the Scottish Highlands and Gaelic myth, to the rivers of the Amazon Rainforest. Two regions both separated and linked by the Atlantic ocean.”

ÚNA is now planning to bring artists from across Latin America to Glasgow during COP26 in November 2021 and this year’s event being online will help build their connections ahead of that.

Isabella says,
“Chile held the presidency of the 2019 summit and so the link with Scotland is particularly important. The eyes of the world will be on Glasgow during COP and so we will aim to share the richness of Scottish culture and highlight the many similarities it shares with Latin America.”

Artist-activist Ailie Rutherford has created the Swap Market in Govanhill, Glasgow as a space for swapping and sharing resources, running fortnightly online meetings for their local members. She says,
“We are coming together to draw, sketch and discuss, around subjects of social justice, the economy and climate breakdown. The aim is to help people find space for creative resistance and action in times of physical distancing.”

But taking things online is not the whole answer, and there are risks too. Ailie’s Swap market events have seen many new faces, many dialling in from across the globe, however Ailie found that at least half of their usual Swap Market members do not have access online,

“We have also needed to instigate a lot of offline ways of sharing and remote exchanges for those people who are don’t have internet access. We’ve been using the Swap Market’s shop windows, local notice boards and poster sites to host artworks.”

Creative Carbon Scotland has been taking an innovative approach to communicating during the pandemic. The organisation was set up to work with the arts and culture community on climate and sustainability, and has found creative ways of producing online events that break the usual panel discussion mould.

“Our next event will consist of a participatory public art work by Rosanna Irvine where participants will connect to devise collective manifestos.“
“We are also working with artist and games designer Matteo Menapace to create a workshop disguised as a role-playing game as well as a virtual ‘Museum of the FutureNow’ created by artists Jo Hodges and Robbie Coleman.”
“These events will allow participants to step out of their daily roles and to be more imaginative and playful in the process of imagining solutions to shared problems.” 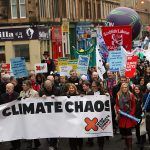