On Wednesday the Chilean Government announced that they would no longer host the UN Climate talks, COP25, due to take place in December in Santiago. This comes only a week after Friends of the Earth Scotland and Stop Climate Chaos Scotland hosted Lucio Cuenca, the chair of the COP25 People’s Summit, for meetings and talks to make connections between Chilean and Scottish civil society as we prepare to receive the UN talks in Glasgow in 2020. Lucio told us of the brutal repression of protest going on in Chile and SCCS condemn the actions of the Chilean Government and stands in solidarity with the Chilean people.

COPs are an essential space to challenge the biggest crisis facing the planet. But they cannot take place where democracy and human rights are under threat. The climate crisis is not just a question of science and ecology – it is also a political crisis, that will require political solutions, which must also deliver climate justice.

This decision cannot detract from the urgency to address the climate crisis and creating a space where the voice of civil society can be heard. Action on climate change by countries must not be delayed, and support to developing countries to protect them from further harm must increase urgently.

We acknowledge that this is a developing situation and we will be waiting for the UNFCCC announcement of rescheduling or relocating the COP. 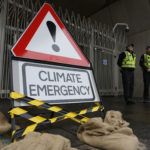