To mark a year to go until the UN climate talks, known as COP26, are held in Glasgow, a coalition of 55 civil society organisations are urging the Governments of Scotland, the UK and other rich polluting countries to urgently ramp up action to tackle the climate emergency.

In a paper released today, called ‘Delivering climate justice at COP26 in Glasgow’, Stop Climate Chaos Scotland (SCCS) outlines the measures needed now and during COP26 to drive down emissions and increase support for communities in the global south already impacted by a climate crisis created by the actions of rich developed countries, including Scotland. 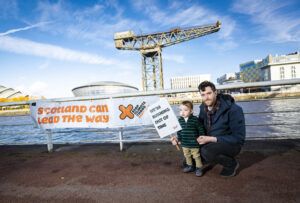 SCCS says the UK Government, as the president of the talks, must urgently publish an ambitious plan for climate action, known as a Nationally Determined Contribution, and then commit significant diplomatic resources to building momentum ahead of the talks. The paper also highlights the clear need for the voices and priorities of countries already impacted by the climate crisis to be at the forefront of the Glasgow talks.

Tom Ballantine, chair of SCCS said: “We know that successive COPs have failed to deliver the climate action we need.  Millions of people are already suffering from droughts, floods, fires and food shortages, despite them doing virtually nothing to cause this crisis. The clock is ticking and we desperately need COP26 in Glasgow to be a turning point for climate justice.

“The Scottish and UK governments will never have a greater opportunity to influence global climate action and it’s time to seize it.

“Scotland has a relatively strong track record with some of the most ambitious climate targets in the global north. Now is the time to bolster that record and use it to drive up ambition in other parts of the world.

“With Scotland’s Climate Change Plan currently being updated, the Scottish Government has the chance to show genuine global leadership by  demonstrating that we are prepared to put in place the measures needed to meet our strong targets.”

Ben Wilson, chair of the SCCS International Group, said: “The talks in Glasgow next year are more important than ever because countries who signed up to the Paris Agreement in 2015 are required to report on how they are delivering on their commitments.

“Many of the poorest people around the world are already suffering the effects of climate change, yet have done little or nothing to cause it. This is an injustice. If COP26 is to be a success, as well as taking action to reduce emissions, it is vital that rich countries fulfil their financial promises to the global south.

“COP26 in Glasgow needs to be a turning point in climate action.

“The Scottish Government should lead by example by increasing its Climate Justice Fund to stand shoulder-to-shoulder with the most impacted communities. It can then use this commitment to drive up global action on climate finance at the conference.”