Tom Ballantine of Stop Climate Chaos Scotland said: “Scotland has a good story to tell on climate commitments, with world-leading targets on carbon reduction agreed unanimously by all parties in the Scottish Parliament.

“The Scottish Government’s Climate Justice Fund is another example that other wealthy nations should follow, helping people living in some of the world’s poorest countries deal with the damaging consequences of climate change.

“We are pleased that the First Minister will take those examples to the other nations of the world.

“Last Saturday, thousands of people gathered in Edinburgh at Scotland’s Climate March, demanding that the Scottish and UK Governments use their influence to push for the strongest and most ambitious deal possible at Paris, and for those commitments to be turned into real action to protect people and planet.” 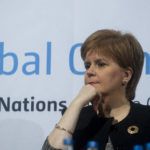