“The Prime Minister has made the right noises at Paris, but if he is being honest about countries sticking to their promises, he needs to change his own policies at home.

“Mr Cameron says we should be taking action today. We agree. His first step should be to reverse his government’s cuts in renewable energy investment, so that we can meet our climate change targets and take advantage of the boost that a green economy will bring to jobs and incomes, in Scotland and across the whole of the UK.”

Stop Climate Chaos Scotland is an official observer at the the United Nations climate change negotiations. The talks are aiming to secure an international agreement on action to tackle global warming. This new agreement will come into force in 2020, when the previous deal known as the Kyoto Protocol expires.

Stop Climate Chaos played a key role in the development of Scotland’s Climate Change Act in 2009, which remains the strongest climate change legislation in the world. 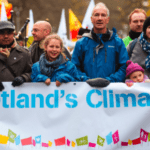