A version of this appeared earlier this week in The National

We are now halfway through the 27th UN climate talks in the remote Egyptian resort of Sharm el Sheikh – a complete contrast to the central Glasgow location a year ago. But although the host has changed, the key issues that are being discussed remain the same, and the need for real action becomes ever more urgent.

I’m attending the conference with Kirstie Shirra, SCCS board member, and members from SCIAF, WWF and FoES. During the week we’ve been speaking at events, feeding back what’s happening to members and the public and keeping track of Scottish Government events and announcements. With some spotlight remaining on Scotland following us hosting last year it’s great that several of us could be here this year to ensure Scottish civil society is represented and heard.

The start of the week was a very busy one for us – with several media interviews and a meeting with the First Minister and climate experts from the Global South. COP is an opportunity for the First Minister to hear directly from people who are experiencing some of the worst climate impacts and the action they want to see from Scotland and other rich nations who have done most to cause the crisis and we hope that this can influence the decisions she makes on both international and domestic climate policy. Experts from Rwanda, Mali, Nigeria, Malawi, Nepal, Bangladesh and India welcomed the leadership Scotland has shown on the issue of finance for communities to recover from irreversible impacts of climate change and urged her to do what she could to encourage other countries to commit finance.

Following the meeting the First Minister announced an additional £5m of funding specifically for Loss and Damage from the existing Climate Justice Fund – we welcomed the continued international leadership from Scotland on this issue but our reaction urged the need to move beyond symbolic figures and to ensure these funds are genuinely new and additional and are raised by making the biggest polluters pay, rather than a allocation of money in the existing Climate Justice Fund. We also welcomed the First Ministers strong words on climate reparations at a panel event, saying that she has “have no difficultly saying it’s about reparation and responsibility. If people can’t see reality of that then something wrong.”

We’ve also seen announcements on L&D finance from Belgium, Austria, Germany and New Zealand – but this also seems to be existing funds and now new or additional money. At our side event yesterday and Global South negotiator referred to the risk of ‘Loss and Damage-washing’ – and this could become something we hear more about over the next few years.

With L&D now on the formal COP agenda and small amounts of money starting to trickle through, the recommendations in the ‘Financing Climate Justice’ report we recently commissioned are becoming ever more relevant. All rich nations need to raise new and additional sources of finance for both action to reduce emissions and to ensure they pay up for Loss and Damage – an amount commensurate to what they owe. We are trying to share the messages from the report and our briefing with as many people as possible at COP, and yesterday Anne Callaghan, co-chair of our International group, highlighted some of the key recommendations at our side event alongside other Loss and Damage experts.

Much of the first days of COP are spent in long queues for food and water and finding your way round the various pavilions, meeting rooms and hubs. Walking through the halls it’s not uncommon to see a giant bear advertising the benefits of nuclear energy, a dinosaur calling on governments to prevent extinction or a fake marble stand with a real tree planted in the middle, as organisations from around the world seek to set themselves aside from the hundreds of other stands and get their messages across. Venturing out between the halls into the bright sunshine, conversations are often cut short by flights zooming over head into the adjacent airport, bringing yet more delegates (and a few holiday makers) from all over the world.

COP clearly has a carbon footprint of its own and signs of ‘greenwashing’ are everywhere. It’s sad to see fresh turf being laid and petunias planted alongside the empty 4 lane highways, with networks of irrigation pipes keeping them barely alive, wasting precious water on trying to beautify the otherwise desert landscape. However, the benefits of bringing the world together to make progress on climate outweighs the cost – if promises are delivered it is estimated that the carbon savings are 72,000 times the emissions produced by the conference itself.

Last year in Glasgow one of the highlights of COP were the incredible range of fringe events hosted by local and international activists, the creative and impactful protests that showed the strong public support for action and the way that people in Glasgow welcomed attendees into their homes. This year there is none of that – protests are banned in Egypt, there are serious concerns about human rights abuses and it is hosted in a resort town that seems to have no permanent residents. People find creative ways to make their voices heard, but that people power and the pressure it means the negotiators and world leaders hear is a big loss.

Some official actions are permitted to take place within the blue zone. There have been youth calls for Loss and Damage finance, banners about going vegan at the entrance and the biggest one I’ve seen so far on human rights, organised by CAN International. On the same day that civil society wore white to show solidarity with and call for the release of Egypts political prisoners, hundreds of people gathered to hear the names of environmental defenders who have died and hear from indigenous activists and human rights campaigners at COP. It’s these moments at COP that give you a bit of hope and make you realise that despite the dangers, there are so many people fighting for the better world we need to see.

As the week goes on we continue to attend relevant events, meet with international partners and keep people in Scotland informed about what’s happening. Despite the long days and lack of positive signs coming out of the negotiations, the adrenaline generated by knowing you’re at the place where these crucial talks on the planet’s most important issue are taking place and that the world’s attention is on it keeps you going. COPs have been taking place for the last 27 years and progress has been far too slow so there is understandable scepticism about what this one will achieve. The world badly needs climate leaders – we are all hoping some step up in the next week. 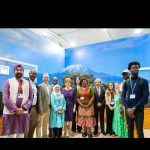 Previous Story:
Scotland continues to show leadership on loss and damage: all rich nations must urgently address this grave injustice at COP27
Next Story:
COP27 climate talks remain stuck in the slow lane