As First Minister Nicola Sturgeon takes up an unprecedented invitation to speak at a High-Level Plenary session at COP23 in Bonn today, campaigners are welcoming her renewed commitment to urgent action on tackling climate change and delivering climate justice.

“Scotland should be proud to be invited to speak at such a high-level event during the COP23 talks.  It highlights the important role we are taking in setting the ambitious targets needed to not only tackle climate change but also provide climate justice.

“Climate change is happening now and is already seriously affecting the lives of the world’s poorest people; those in communities that have done the least to cause the problem. The fact that the First Minister used her speech to highlight this growing injustice, and call for urgent and early action from those who have caused the climate crisis, is to be welcomed.

“When it comes to climate change, what Scotland does gets noticed right around the world, so it was great to see Scotland’s First Minister representing the interests of the planet’s states, regions and devolved governments at this year’s UN climate conference.

“Passing a strong Climate Change Bill in 2018 would make Scotland one of the first nations to respond to the Paris Agreement with stronger climate change targets. A new Climate Bill that commits Scotland to becoming climate neutral by 2050 at the latest, and introduces ambitious new action to reduce emissions would ensure that Scotland continues to lead on this issue.”

“This Gender Action Plan, which increases the representation and role of women in climate policy and action around the world, is one of the positive outcomes of COP23. We warmly welcome the Scottish Government’s support for the initiative, including the funding announced today.”

Previous Story:
Connecting the dots for a fairer, greener future 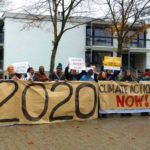 Next Story:
What do the UN climate talks mean for Scotland?