What do the UN climate talks mean for Scotland?

The 23rd annual UN Climate Change Conference (COP23), took place earlier this month in Germany. We look back at what happened, and what the outcome means for climate action in Scotland.

While the summit was hosted in Bonn, Germany, it was Fiji who held the presidency role – the first time in the 23 year history of these international summits that the presidency has been held by a small island state. Fiji’s future, and that of other low lying nations, depends on international climate action. Rising sea levels have already forced entire communities to abandon their homes and move to higher ground, as encroaching sea water damaged their houses and their ability to grow food. Last year they were hit by Cyclone Winston, the worst natural disaster ever to hit the Pacific Islands and the strongest storm ever to make landfall in the Southern Hemisphere.

Fiji’s role at the helm shone a light on the many people already dealing with the consequences of climate change, with people from all over the world sharing their personal experiences and powerful stories of climate impacts to put pressure on governments to raise their ambitions. Many had hoped the legacy of Fiji’s presidency would see increased climate finance and support from rich countries for people already harmed by climate change, but in the end little progress was made on these issues. 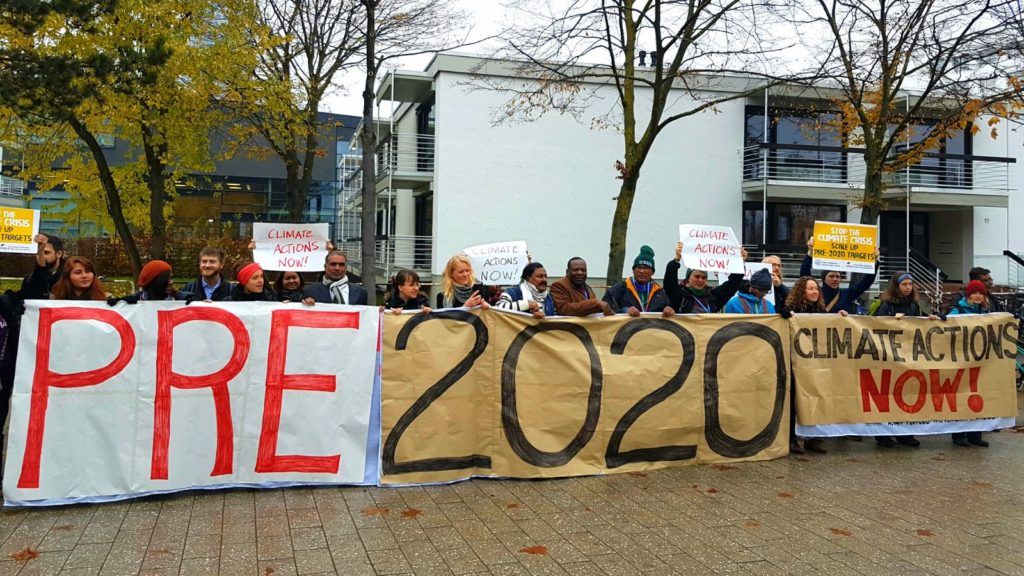 From the very first day of the talks, developed countries were demanding that the world shouldn’t wait until the Paris Agreement kicks in after 2020 to begin raising ambition, but to increase global action now. As a result, a ‘stocktake’ will now take place in 2018 and 2019 to examine how countries are progressing towards meeting their 2020 targets. This will take place as part of a new process called the ‘Talanoa Dialogue’ which is intended to lay strong foundations for delivering the Paris Agreement. However key concerns remain over the need for climate finance and support for developing countries to be included.

Positive outcomes from the talks included the adoption of a Gender Action Plan to increase the representation of women in the UN climate processes, to which the Scottish Government are contributing £300,000 of funding, and establishing the Platform for Local Community and Indigenous Peoples to enhance engagement.

Campaigners also welcomed the news that negotiators broke a five-year long stalemate around agriculture, opening the door to actual action in this vital area with a new work programme to begin next year.

Much of the talks in Bonn were centred around the ‘Paris rulebook’, which will set out the rules for implementing the Paris Agreement.  The Agreement sets a goal of limiting global warming to 1.5ºC, however emissions cuts pledged so far are only a third of what is needed to avoid the worst predicted impacts of climate change.  This means that all countries must raise their ambition and cut emissions further, including Scotland. 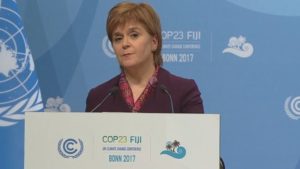 First Minister Nicola Sturgeon spoke at a ‘high level’ event at the climate summit, alongside the UN Secretary General, the UN Climate Chief, and President of COP23, Fiji PM Frank Bainimarama. During her speech she acknowledged that “it would be deeply damaging for all nations, and catastrophic for some” if we do not deliver on the Paris Agreement, and said that Scotland is“determined to lead by example”.

With the upcoming Climate Change Act, Scotland has the opportunity to show climate leadership and play our full part in the Paris Agreement. To do this, the Act must set stronger targets – reducing climate emissions by at least 77% by 2030, instead of the 66% currently proposed, and reaching net-zero emissions by 2050 at the latest.

Nicola Sturgeon also took time during the talks to meet with Friends of the Earth International representatives from Malaysia, Sri Lanka and Nigeria, and also with World Council of Churches members from the Pacific Islands, to hear directly from climate impacted peoples about the reality they face.  We hope that she listens to their calls for urgent action, and acts to increase the ambition in the new Scottish Climate Change Bill.

SCCS and member organisations will be campaigning throughout 2018 to make sure that Scotland’s new Climate Change Act is as strong as possible. There will be exciting opportunities to get involved in workshops, training and campaign events.

SCCS members Mary Church and Caroline Rance from Friends of the Earth Scotland and Adrian Shaw from Church of Scotland attended COP23 in Bonn.