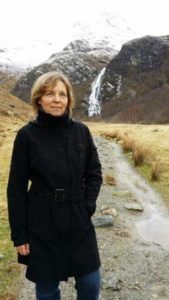 Any lasting and just solution to the climate emergency facing us must lie in changing the economic and political structures that bind us to a high carbon model, where profit comes before people and planet. So, while it’s vital that we push for the strongest Scottish Climate Change Bill possible, we also need to have our eye on what else is going on – and resist anything that could threaten it.

The so-called ‘new generation’ trade deals like the EU-Canada deal (CETA) the Trans Pacific Partnership (TPP) and the now defunct EU-US Transatlantic Trade & Investment Partnership (TTIP) are an intrinsic part of the global economic system, and in many ways epitomise all that is wrong with it.  And they are a direct threat to efforts to halt climate breakdown.

As an EU member state, the UK government has been a cheerleader for all of these deals, and has made it clear that this is the model they favour for any post Brexit trade deals.  Indeed, UK government ministers are already in talks with the US about a possible TTIP-style trade deal between the UK and the US, and they’re also keen to join us up to the Trans Pacific Partnership (despite the fact that we’re nowhere near the Pacific!).

If we are to halt climate breakdown, then we must stop these trade deals.

Why is that?  Well, these kinds of trade deals go beyond straightforward barriers to trade, like tariffs and quotas. They focus on public policies – from food standards to energy regulation – which have a big impact on climate change. They give unprecedented power to big business and they embed in global governance the principle that the ‘right to trade’ is more important than tackling climate change (or any other environmental or social issues, come to that).

Here are five reasons why we have to stop these trade deals if we are to successfully tackle climate change:


1. Putting trade before the environment

The purpose of free trade agreements has been to promote the free flow of goods and services around the world. While trading can of course be positive, and raise standards of living, trade for its own sake, regardless of its social and environmental consequences, can be problematic. More trade means more shipping, more lorries and more aviation, due to increased volumes of freight.

Globalisation has created a system of governance that puts the interests of those who trade internationally – mostly big business – ahead of the protection of people and the planet.  Unlike environmental, human rights or labour agreements, trade agreements often have strong enforcement mechanisms which mean that governments or corporations can take legal action if other governments violate those agreements.

Modern trade agreements like TTIP and CETA include chapters that stop local and national governments from discriminating between foreign and domestic producers.  Both must have equal access to the market. This makes it more difficult to favour local, more environmentally sustainable companies over multinationals. The only thing that matters is the lowest price.

The Investor-State Dispute Settlement (ISDS) system of secret corporate tribunals contained within trade deals allows corporations to sue governments outside the domestic legal system for adopting policies that have the potential to reduce their profits.

ISDS has already been used to protect the interests of big oil, gas and coal companies on numerous occasions, for example:

At the core of the new generation of trade deals is the idea of ‘regulatory cooperation’. Many regulatory standards are seen as ‘trade barriers’ by businesses, placing ‘unnecessary burdens’ on their ability to export. But many of these regulations are important and democratic ways of managing our society and protecting the environment.

The idea of a ‘regulatory co-operation council’ was proposed for TTIP and CETA. This would make it compulsory for parliaments to give companies early warning of any new regulation that might impede trade. And this in turn would mean that corporations would, in effect, be given an exclusive right to lobby.

This would give big business even more influence over our laws, for instance allowing them to see and comment on proposed legislation before elected representatives have had an opportunity to do so.

Agriculture is one of the main contributors to climate change, with food production estimated to cause between 19 and 29% of global greenhouse gas emissions. The main culprit is agriculture practiced on an industrial scale, geared towards meat exports to Western markets, and using high levels of chemicals and synthetic fertilisers.

Since trade deals aim to harmonise regulations between the trading countries (in order to remove those pesky barriers to trade) it is extremely likely that there will be downward pressure on more climate-friendly forms of agriculture, in favour of industrial methods. Small farmers practising less carbon intensive methods such as organic, would find it increasingly difficult to compete with industrial farming as practiced in the US.

Lobbying by agribusiness and the food industry during TTIP negotiations was intense. A study by the Trans National Institute found that lobby group meetings by this sector far outnumbered any other sector during the negotiations. Agribusiness saw TTIP and CETA as a key way of getting the EU to drop opposition to antibiotics, chemicals and genetically modified products in agriculture.

The negotiating text of TTIP included an Energy Chapter that aimed to create a ‘free market’ in fossil fuels across the TTIP zone (the EU and US). The chapter was proposed by the European Commission, and sold on the basis that it would reduce European dependence on Russian gas. But unfortunately it would have meant simply replacing one fossil fuel dependence with another, making the EU dependent on US oil and fracked gas and on US and Canadian tar sands oil – the most toxic fossil fuel in the world. The chapter would have been a green light for the US and Canada to increase fracking and tar sands production. Far from being seen as ‘transition’ fuels to overcome short-term coal dependence, the infrastructure required to export these fossil fuels would lock-in their production for a generation. While negotiations on TTIP may have stalled, it is still expected to be a blueprint for other trade deals.

So, what can we do about these trade deals?

Massive public pressure, right across the EU and the US, successfully led to TTIP being kicked into the long grass.  People power works! Just last month, a new international campaign began which aims to put an end to corporate courts (ISDS) in all trade deals, and that would hugely reduce their negative impacts. Sign the petition here to call for no more corporate courts.

It’s so important that we get the strongest possible climate change legislation here in Scotland, and we’re absolutely committed to that.  But let’s not take our eye off the bigger picture and let this new generation of trade deals undermine those efforts.

Next Story:
Blog: Climate science says we all must do more, faster