As so many of us are aware, the climate crisis is not going away. Reduction of carbon emissions during the peak of COVID-19 – when flights were grounded, manufacturing brought to a halt and most people confined to their homes – was 4.6%. Significant, but still a long way off from the 7% required – which would need to keep falling further each year this decade if we are to avoid a rise of over 1.5C in global temperatures. Indeed, the impacts of climate change are already starting to occur: record high temperatures, increasing intensity and frequency of storms, widespread permanent calving of ice sheets, and rising ocean acidity levels. Inevitably, it is the poorest and most disadvantaged groups who experience the consequences of these impacts first, although even people in the richest countries – like in the USA or Australia – are waking up the to the fact that they can’t escape it either.

What is to be the agenda of the COP26 climate summit in Glasgow next year? Going by previous COPs, we may well find ourselves wondering what practical difference it makes. Most governments have made commitments to reduce carbon emissions – some have even declared climate emergencies – but there is almost a void in implementing practical steps. Short sighted arguments, based on the illusion of limitless economic growth (as measured by production and consumption, or GDP), are already being touted by leading politicians. Where there is such a burning need for economic ‘prosperity’, the climate all too often is a marginal consideration. Even though the long term costs will be far, far higher.

With this backdrop in mind, the Arkbound Foundation is working with other organisations to deliver a landmark publication, timed for the COP26. The focus will not be on raising awareness of the climate emergency or outlining ways to reduce emissions, but rather conveying a practical way for people and communities to adapt to climate change, even looking at new socio-economic models. For too long we have tried to forge ahead under a model based upon exploitation – of other people and the environment. We need to start looking to models based on self-sufficiency, a circular economy and shared, cooperative ownership. By drawing on case studies from around the world – from Indigenous communities based in the Global South to leading academics working on pioneering projects – the book seeks to present a resource for people looking to build a new future.

Alongside the book, we will be looking to open up possibilities around the support and creation of ecological communities in Scotland, to provide a place for climate refugees across the world to live and learn, as well as other groups looking to live sustainably. From the Findhorn Foundation based near Inverness to the Samye Ling centre in Dumfries and Galloway, Scotland is speckled with self-sufficient communities that produce their own food, with minimal (even negative) carbon footprints. Even in urban areas, there are ways to implement some of the knowledge and practices of these places to make life better for everyone.

In the run up to these initiatives, we are looking to plant 1000 native oak saplings around the Glasgow area. Planting a tree is more than a symbolic gesture: it will go on to survive our lifetime, providing clean air and a habitat for countless species. The UK, including most of Scotland, was once covered in trees – but at present they only cover 13% of the land, contrasting with an average of 35% for most EU countries. Planting more trees and re-wilding is an important aspect of addressing climate change, but despite Government commitments in this area we are still a long way behind.

It’s time to empower ourselves and work together for a better future, realising the immensity of the challenge but finding hope in what others have already accomplished. If you are interested in getting involved with any of these initiatives, please feel free to contact us via info@arkfound.org or visit our website at www.arkbound.ac.uk 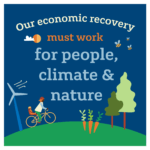 Previous Story:
Finding our way through two emergencies
Next Story:
TIME FOR SCOTLAND TO LEAD THE WORLD ON CLIMATE ACTION