Letter published in the Scotsman

Horse meat in kids’ school meals and multinationals’ tax dodging are two recent scandals to have captured the public’s imagination, and are arguably more likely to grab readers’ attention than the subject at the heart of this letter: the Scottish Procurement Reform Bill.

From apartheid-related boycotts and beyond, Scots have long understood how to harness their buyer-power in order to bring about positive change. Last month Scotland became only the second country on earth to be declared a Fair Trade Nation, reflecting a vast increase in our propensity to seek out fairly-traded goods. Two weeks ago a Christian Aid poll found that 55% of Scots are considering boycotting companies that they perceive to be dodging taxes (a far higher percentage than the UK-wide figure).

If we are taking these actions at individual level, it seems reasonable to expect our governments to follow suit. Scotland’s biggest consumer is our public sector, which spends a whopping £9 billion per year on our behalf. The Procurement Reform Bill, due to pass through the Scottish Parliament this year, is our opportunity to use that weight of money to demand high standards of our public sector suppliers in areas such as fair trade, carbon emissions, tax practices, labour standards, community-based solutions, animal welfare and more.

The legislation was initially to be called the Sustainable Procurement Bill. We hope that its new name does not reflect any diminution in its social, environmental and ethical objectives. We will be working together to ensure that sustainability is at the heart of this bill, a vital opportunity to reflect Scotland’s values in what we buy. We look forward to working with the Scottish Government in shaping this important piece of legislation.

Chris Hegarty, Chair of Enough Food for Everyone IF Scotland 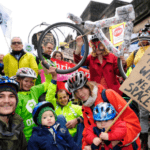