Coalitions of civil society organisations from across the UK have welcomed the announcement of a new date for COP26, the UN climate talks that were due to happen in November 2020. COP26 will now take place from 1st – 12th November 2021 in Glasgow.

UK coalitions campaigning on climate are planning to mobilise their supporters to push for more climate action and for UK governments to put in place early and ambitious plans to reduce emissions in order to encourage other countries to do the same.

“When the talks arrive in Glasgow, the people of the UK will stand in solidarity with those in the most impacted countries in demanding climate action. The world is currently on a path to catastrophic climate change. To alter that we must build momentum from now including through the delivery of a Just and Green Recovery from COVID. It is critical that our governments urgently get on track to meet their climate targets. We can and must set an example to the rest of the world before and during COP26 in Glasgow.”

“Postponing COP26 was necessary due to the current health crisis. However, acting on climate change remains as urgent as ever, and we welcome the new date for these crucial talks. We need the UK as hosts to ensure the Glasgow climate summit is successful and sets us on the path to a safe climate for all. Underpinning all of this is the imperative that global economic recovery is sustainable and doesn’t prevent us from limiting warming to 1.5C.”

Key issues being discussed at the talks will include countries’ national pledges in support of global efforts to hold average temperature increases to 1.5C and increasing climate finance to help countries that have done least to cause the problem adapt to the effects of climate change and grow low-emission economies.

Kevin Rahman-Daultrey, co-chair of Stop Climate Chaos Cymru said “ The talks must be given their proper significance, being held at a time when it is safe to do so and when the voices of civil society, activists, and those most affected by climate change can be heard – a task that will require careful consideration depending on how COVID-19 now develops.”

“Northern Ireland must also play its part in meeting the UK target. NI does not have any NI-specific statutory climate change legislation and we believe this illustrates a lack of leadership. In ‘New Decade, New approach’ the NI Executive committed to introduce legislation and targets for reducing carbon emissions and the NI Assembly declared a climate emergency in January 2020, but still no targets have been set for NI. This situation should be rectified before COP 26, otherwise the UK government will be in the position of trying to co-ordinate a global response to tackling climate change when one part of the UK has no climate change targets. A climate act in NI should be an integral part of the green recovery” 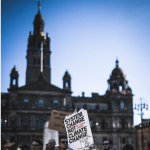 Next Story:
COP26 is delayed a year – 3 things we need to do and 3 reasons why it might just work