As he prepares to join the UK delegation at the COP18 climate talks in Doha next week, Scottish Climate Change Minister Paul Wheelhouse MSP is being urged to reaffirm Scotland’s commitment to demonstrating how developed countries can tackle climate change.

Scotland has the strongest climate change legislation in the world, yet earlier this year the Scottish Government announced it has failed to meet the first target in the Climate Change Act, with emissions from our housing and transport sectors higher now than they were in 1990. In order for Scotland to continue to promote its world-leading legislation to other countries, it is vital there is an increase in domestic policy effort in order to ensure that each and every future target is met.

Stop Climate Chaos Scotland (SCCS) is calling on developed countries to follow Scotland’s lead by agreeing to ambitious reductions in emissions during the international climate negotiations in Doha. The Scottish Government can play its part by:

“Time is running out as the only agreement we currently have – the Kyoto Protocol – is due to end in a matter of weeks. A second commitment period for the Kyoto Protocol must be agreed in Doha to take us through beyond the end of this year. We then urgently need a follow-on agreement if we are to keep emissions under control and avoid the catastrophic effects of runaway global warming.

“The Scottish Government has shown solidarity with the world’s most vulnerable people affected by climate change by establishing a Climate Justice Fund. This is a great example of the kind of action needed by all developed countries to help those suffering elsewhere because of our actions.

“However, earlier this year it was confirmed Scotland had missed the first domestic target in the Climate Change Act. More effort is needed, particularly in our housing and transport sectors. For the Scottish Government to continue promoting our climate leadership abroad, we need to ensure that ambition is matched by action at home, only then will we truly demonstrate climate leadership.” 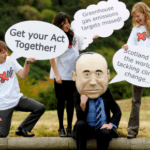