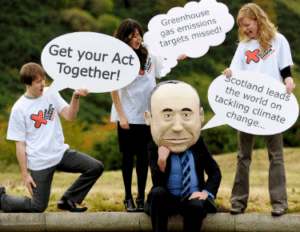 Scots from across the length and breadth of the country gathered today at the Scottish Parliament to demonstrate their concern at the Scottish Government’s failure to meet the very first emissions target set under the Climate Change Act (Scotland).

The message to Alex Salmond and his Government was clear: Scotland’s claim to have ‘world-leading’ legislation is undermined by the first legally-binding target being missed, and there is insufficient action to get back on track.

The mass lobby of the Scottish Parliament, organised by Stop Climate Chaos Scotland (SCCS), followed a statement on Tuesday by Paul Wheelhouse MSP, Minister for Environment and Climate Change, on why the Government has missed its first climate target. Despite a commitment to reduce emissions by 42% by 2020 (on 1990 levels), the Government has conceded Scotland emitted more greenhouse gases in 2010 than the previous year.

“The First Minister is quick to champion Scotland’s climate change legislation and hold it up as a world-leading example. However, the failure to meet the first target set by the Scottish Climate Change Act demonstrates a lack of action by the Scottish Government to reduce emissions, and undermines the example they claim to have set.

“This isn’t good enough. Thousands of Scots campaigned for, and celebrated, this legislation. We are back here today because we’re extremely worried that unless the Government takes seriously the urgent need to tackle climate change – through policies that will reduce emissions, particularly in the housing and transport sectors – then Scotland really isn’t leading the way at all. World-leading climate targets demand world-leading climate policies.

“We want to see action on climate change from our politicians, not just rhetoric. It’s time for them to follow through on what was actually promised.”

Jamie Hamilton from Stirling, who wrote to his MSP before taking part in today’s lobby, added:

“People are tired of talk from politicians and need to see that what they say is actually delivered. I’m here today because I want to make sure they are doing everything they possibly can to make sure Scotland implements the Climate Change Act. We fought hard for this legislation and they seem to be talking a good game, but why are we still waiting for action?”

Climate change campaigners posed outside Parliament, including one wearing a giant 3D Alex Salmond head, with large speech bubbles highlighting the contradiction between Scottish Government rhetoric on ‘world-leading’ climate change legislation, and the reality of its failure to deliver.

The Government’s advisory body, the UK Committee on Climate Change, has repeatedly called for a ‘step change’ in efforts to reduce emissions , and Stop Climate Chaos Scotland, the country’s largest civil society coalition, has been pressing the Government to take seriously the need for action.

Organisations and individuals represented at the Parliament today are concerned that the Government’s spending commitments have focused heavily on high carbon activities such as road-building programmes, without sufficient priority given to funding its own plans to reduce emissions. Stop Climate Chaos Scotland wants to see improved low carbon transport and housing policies which are consistent with what the Climate Change Act was set up to achieve, and warns that if the Scottish Government sticks to its current course, it risks only meeting one annual emissions target between now and 2022.

Today’s event enabled Scots from regions across the country to express these concerns directly to their politicians, urging them to write to the First Minister, Alex Salmond, to call for increased effort to reduce Scotland’s emissions and make sure the Government never misses a climate target again.

Previous Story:
Government falls short of getting climate change promise back on track
Next Story:
Scotland urged to show leadership at Doha