Scots ‘Show the Love’ for the life that climate change threatens 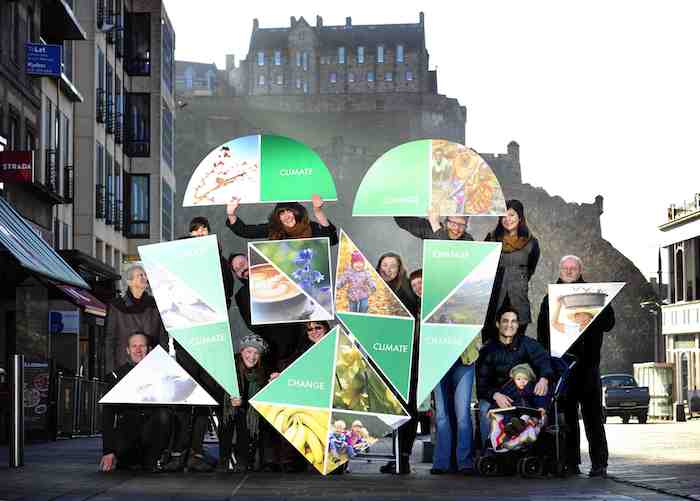 Stop Climate Chaos Scotland is asking people to stand up for the special places they want to protect from global warming, as part of the ‘Show the Love’ campaign which kicks off today. In the week leading up to Valentine’s Day (7 – 14 February) members of the public will be making, wearing and sharing green hearts to show climate change is an issue they care about.

In Scotland, we have a real opportunity to influence positive action on climate change with the recent publication of the Scottish Government’s draft Climate Change Plan.

The plan outlines an attractive vision of the kind of low-carbon society we could be living in come 2032, however Stop Climate Chaos Scotland is concerned about the plan’s lack of concrete new actions to deliver it.

The coalition would like people to write to, or meet with, their local MSPs and give them a green heart to ask them to support a stronger Climate Change Plan and show the love for Scotland’s future.

Caroline Rance, Campaigns Manager for Stop Climate Chaos Scotland, said: “We’re already feeling the effects of climate change, both here in Scotland and around the world. It affects all of us, and so it’s important that we all have a say in how Scotland tackles climate change in order to protect the places, people and things we care about.

“The Scottish Government’s draft Climate Change Plan is encouraging because it clearly illustrates the cleaner, healthier Scotland we are working towards. However, experts have repeatedly highlighted that we need to do more to reduce greenhouse gas emissions from transport, agriculture and heating to reach that goal. The plan does little to reduce emissions from these worst areas.

“SCCS wants to see a stronger Climate Change Plan from the Scottish Government, which includes things like increased investment in active travel and more support for improving the energy efficiency of homes; we would love the public’s support in calling for this. What better week to take action and let your MSP know that you care about climate change than during ‘Show the Love’?”

Show the Love is an annual celebration of all the things we love but could lose to climate change organised by The Climate Coalition in England, and sister organisation Stop Climate Chaos Scotland.

From our own back gardens to the coastal seabird cliffs of St Kilda, from historical buildings like Stirling Castle to local parks, woodland and waterways – too many special places are bearing the brunt of a changing climate.

To launch ‘Show the Love’ in 2017 The Climate Coalition published ‘Weather warning’ – a report highlighting how a host of much-loved habitats, iconic landmarks and everyday places in the UK are already being impacted by climate change, including the famous neolithic village of Skara Brae in the Orkney Isles.