Tomorrow, four Parliamentary Committees which have been considering Scotland’s new plan to tackle climate change will publish their final recommendations to the Scottish Government

Ahead of the publication, Chair of Stop Climate Chaos Scotland, Tom Ballantine, said: “The Government’s Climate Change Plan, as it stands, sets out an attractive vision for the Scotland of the future – cleaner, healthier and altogether more prosperous – which is very welcome, but it lacks the detail needed for this to be delivered. Without the detail it is not credible. In order for this country to truly be a world leader we need bold policies on climate change, particularly when it comes to transport and agriculture which, when combined, currently contribute more than half of all Scotland’s greenhouse gas emissions.

“The Committees have now heard from experts and the public, with the overwhelming response that the Government needs to set out clear actions and timescales in their plan for cutting emissions and helping us move toward a low-carbon society in the coming years.

“We hope the Committees use this opportunity to recommend much needed improvements, to ensure the final plan reflects Scotland’s ambition to lead the way in tackling climate change and creating the greener, healthier country we’d all love to live in. All parties have committed to ambitious action. Climate change is not going away. The impacts are increasingly being felt here in Scotland, and around the world; there has never been a better time to stand up and be bold.”

In January this year the Cabinet Secretary for Environment, Climate Change and Land Reform, Roseanna Cunningham, published a new plan to tackle climate change in Scotland.

Since then, four specialist Parliamentary Committees have been considering the draft Climate Change Plan with a view to making recommendations to the Scottish Government.

In the last two months, the Committees have heard evidence on the plan from experts and accepted views in writing from the public. They are now ready to publish their recommendations on what they believe the final Climate Change Plan should contain. The Committee reports will be made public on the morning of Friday 10 March.

Next week MSPs will have a chance to question and comment on the plan during a debate in Parliament. It will then be down to the Scottish Government to agree and finalise Scotland’s Climate Change Plan. 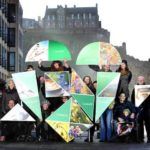 Previous Story:
Scots ‘Show the Love’ for the life that climate change threatens