“It’s great to see Scottish Labour back calls for the upcoming Climate Change Bill to include a target to end Scotland’s contribution to climate change by 2050 at the latest and increased action over the next decade. It’s now up to all parties in the Scottish Parliament to come together, as they did in 2009, to ensure we continue to be amongst the world leading nations in tackling climate change.”

“Labour’s commitment to a Just Transition Commission in the Bill is also to be welcomed. Such a commission would ensure that the transition to a zero-carbon economy supports workers and communities, and creates new, green jobs.”

“No country on earth will be left untouched by the worsening consequences of a failure to move fast. While we’ve enjoyed a period of record warm weather; the extremes of heat experienced around the world this year and over recent years can mean increased mortality, drought, fire, hunger and crop failure. We have all the solutions we need now to get us on the right pathway. Good policies to tackle climate change can help us avoid the worst impacts, but also bring new jobs, cleaner air, and reduced burdens on our NHS. MSPs of all parties need to act together so Scotland can play its part and enjoy all those benefits.” 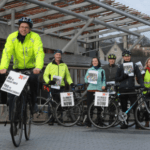 Next Story:
Walking and cycling can tackle climate change now