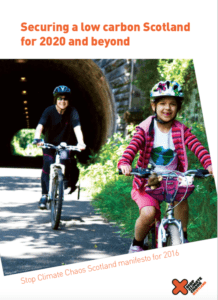 Stop Climate Chaos Scotland (SCCS) is taking its new climate manifesto round the parties’ autumn conferences, calling for the policies to be included in their 2016 manifestos.

“Securing a low carbon Scotland for 2020 and beyond is essential. There are challenges, but we are hopeful our politicians will rise to them.

“First Minister Nicola Sturgeon said recently that moving to a low carbon future isn’t just a moral imperative, but also a massive economic opportunity. We are encouraged that she and the other four main party leaders in Scotland committed in August to manifestos that will deliver the ambitions of our world leading climate legislation.

“Our message to them all today is that there are so many positive benefits from our seven policy asks that they are a win, win all round, delivering high quality job opportunities, improved health and wellbeing and a more pleasant environment for everyone.

“Scotland should be sending a strong message to the United Nations climate talks in Paris in December, demanding a binding global deal on climate action, and saying that our politicians are all committed to ensuring we play our fair part here.”

SCCS will be running a public campaign early in the new year so that politicians will hear the ongoing strong public call for action on climate change.

On the last weekend of November, Scots will be among hundreds of thousands of people around the world marching for action on climate change.

Scotland’s Climate March is expected to attract thousands of people onto the streets in Edinburgh on Saturday 28 November, demanding an agreement in Paris that cuts greenhouse gas emissions and helps the poorest countries adapt to the challenges they face caused by climate change. 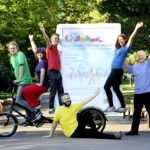 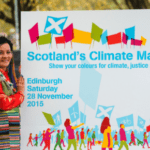 Next Story:
Scots groups join forces to march for climate, justice and jobs