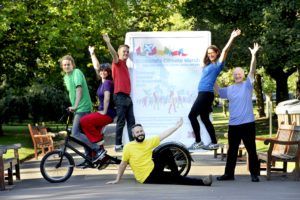 Scots are being urged to join hundreds of thousands of people around the world in marching for action on climate change on Saturday 28 November.

Scotland’s Climate March is expected to bring thousands of people onto the streets of central Edinburgh, sending a message to world leaders attending the UN climate summit in Paris.

The event will see people from all over Scotland come together to call demand an agreement in Paris that cuts greenhouse gas emissions and help the poorest countries adapt to the challenges they face caused by climate change.  The family-friendly march will culminate with music, entertainment and speeches at the iconic Ross Bandstand in Edinburgh’s Princes Street Gardens.

Scotland’s Climate March – organised by Stop Climate Chaos Scotland (SCCS) – the largest civil society coalition in Scotland – will be one of many being held in cities around the world between 28 and 29 November.

At the launch in Edinburgh today, Tom Ballantine, Chair of SCCS, said:

“By joining Scotland’s Climate March, Scots can unite with citizens around the world in calling on world leaders to avert dangerous climate change.  When they meet in Paris it’s vital that political leaders agree how they are going to deliver the cuts needed to global greenhouse gas emissions and help to developing countries already being hit hard by climate change. The march in November is our chance to let them know we want a meaningful and just solution to the climate challenges we all face.”

Speaking at the launch Andrew Burns, the Leader of Edinburgh City Council, said:

“Edinburgh City Council is delighted to be supporting Scotland’s Climate March and would encourage everyone in Edinburgh and beyond to join us for a fantastic day out on 28 November.  This is a chance for individuals to ask the world leaders gathering in Paris to follow Scotland’s strong commitment to climate action and to reach an ambitious global deal to address this problem.” 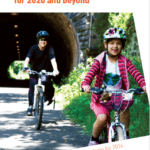