The Wave floods into Glasgow to demand action on climate change 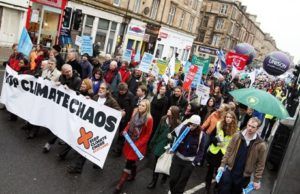 The people of Scotland sent a strong message to world leaders today ahead of vital climate change talks in Copenhagen next week.

The Wave, a family-friendly march through the streets of Glasgow, demonstrated the concern felt by ordinary people that world leaders meeting in Copenhagen for the forthcoming UN summit should share Scotland’s ambition on climate change, that the poorest must be protected and that nations must act fair and fast to address the problem.

Those who marched from Bellahouston Park to Kelvingrove Park enjoyed a range of entertainment from speeches and live music to events specially laid on for the many children present.

The Wave was organised by Stop Climate Chaos Scotland (SCCS), which represents over 60 organisations and 2 million people across Scotland – including Oxfam, Christian Aid, SCIAF and WWF – the largest civil society coalition since Make Poverty History in 2005. There were simultaneous Waves in Belfast, Dublin, London, Paris, Brussels and Berlin.

“I am delighted so many people braved the December weather to take a stand against climate change.  Scotland has the strongest climate legislation in the world and the turn out today shows why – people care.  Leaders meeting in Copenhagen over the next two weeks should be in no doubt, the eyes of the world are on them and we must see the western world in particular, setting the scale and immediacy of targets we know we need to prevent runaway climate change.”

Selina Shelley, an Oxfam Global Campaigner from Bangladesh, who spoke at The Wave march, said:

“In my home country of Bangladesh, people are struggling every day to cope with the impacts of climate change. Floods, natural disasters and severe weather events are robbing families of their children and taking homes, jobs, food and water.

“World leaders meeting in Copenhagen next week must strike a fair and binding deal to cut emissions and prevent people living in countries like Bangladesh suffering further from climate change.”

“RSPB believes that birds and wildlife are already showing visible signs of how our climate is changing around us. Like the canary in the coal mine, they are alerting us to the dangers ahead. These signs of rapid environmental change are already upon us, with, for example, our sea-bird cliffs along North Sea coasts in summer a pale shadow of their former glories, as birds like puffins and kittiwakes struggle to find the food they need.

“The politicians in Copenhagen must show courage and come up with a binding agreement to cut our emissions and reliance on carbon fuels. Our best hope for averting dangerous climate change is by acting now.” 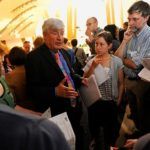 Previous Story:
Scotland ‘leads the world’ in the fight against climate change
Next Story:
SCCS response to COP15 Copenhagen talks