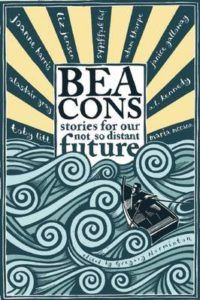 Some of Scotland and the UK’s leading writers have come together to produce a short story collection exploring the impact of climate change on our future.

Beacons: Stories for our not so distant future brings together 21 storytellers, including Alasdair Gray, Joanne Harris, AL Kennedy and Janice Galloway to share visions of the effect of climate change on the world around us.

From Joanne Harris’ powerful vision of a near future where venturing outside becomes a dangerous habit, to Nick Haye’s beautifully illustrated tale of the bond between man and nature, the authors have created provocative, funny, sometimes satirical, and at times deeply moving stories that bring an immediate reality to the problems at hand.

Acclaimed Scots writer and artist Alasdair Gray contributes ‘Goodbye Jimmy’, a tale featuring an angel who may also be the devil who comes to implore a ‘head-masterly’ God for help in saving the Earth for, or possibly from, humans.

The book’s editor and one of the contributing authors, Gregory Norminton, said:

“This is an extraordinary collection from some of our best known authors and keen observers of the world around us. Each writer has created a powerful story that illustrates the sobering impact that climate change can have on our lives and the need for immediate action to prevent the fiction becoming reality.”

The project was conceived of by Stop Climate Chaos Scotland board member, Mike Robinson, who said:

“This book is intended to communicate to the heart, gut and imagination, in a way that much scientific literature struggles to do. Some people seem to fear change more than they fear climate change.

“We hope this book of short stories will challenge, engage, amuse and inspire people and that ultimately it might encourage them to consider the sorts of things we can all do to be more sustainable.

Previous Story:
My review of ‘Beacons: stories for our not so distant future’
Next Story:
UK watchdog warns of challenges ahead for climate targets