In the third of our blogs from COP25 in Madrid, Fiona Buchanan of Christian Aid reflects on being part of one of the biggest Climate mobilisations seen and sets out the challenge of building momentum towards COP26 in Glasgow.

On Friday Stop Climate Scotland members joined civil society from around the world and took to the streets in Madrid in a huge show of support by the global climate movement to demand increased ambition to address the climate crisis. Led by indigenous groups, Chilean civil society and the Fridays For Future youth movement, the march highlighted connections between people’s movements across the world and represented a show of solidarity with grassroots groups from Chile, whilst simultaneously calling world leaders to grasp the urgency of the climate crisis and take urgent action.

The march ended with a rally at Nuevos Ministerios, where civil society delegates read the People’s Summit 6D Manifesto, the result of the coming together of grassroots groups and those already suffering from the devastating impacts of the climate crisis.

A similarly powerful march was held in the Chilean capital of Santiago which was initially expected to host the UN conference, until weeks of civil unrest led to the Chilean government withdrawing. One of the most striking elements of the march in Madrid was the way in which it represented the growing diversity of the world’s climate movement, as more and more people speak out to demand strong action on mitigation, adaptation, and loss and damage from their governments. It’s clear that from the streets of Madrid, Santiago, and around the world, to the halls of the UN negotiations, the climate movement is speaking out and making its voice heard.

In Scotland we have a huge opportunity over the coming year to build on this momentum as we look forward to hosting COP26 in Glasgow in November 2020. Civil society is already mobilising, and liaising closely with global groups to ensure the smooth transition from Chilean and Spanish civil society to Scotland and the UK. In Glasgow the dynamics of a city built on the back of the slave trade, along with its history as the birthplace of the industrial revolution gives a significant backdrop. Added to this is a rich history of powerful people’s movements, workers’ struggles and grassroots organising. The narrative we can build is one of drawing together this complicated history in a way that provides transformative opportunities for us as a movement. We invite you to join us on this momentous journey over the coming year and beyond. 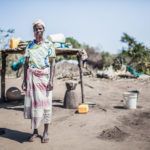 Next Story:
Malawian farmer explains the devastating impact of the climate crisis at COP25