What did we call for?

Why did we set these targets?

A team of international experts on climate science recently concluded that if we’re going to have a good chance of limiting global warming to 2ºC then global emissions need to halve in each decade and reach zero emissions by 2050.

If we’re going to go one step further and try to limit global warming to around 1.5 ºC, as the world agreed to try to do through the Paris Agreement, then our emissions need to fall to zero even faster, ideally closer to 2040 rather than 2050.

The UN’s climate scientists, the Intergovernmental Panel on Climate Change (IPCC) published a report in October last year which made clear that all governments must act faster to limit global warming to no more than 1.5°C in order to avoid the most catastrophic climate impacts. The IPCC report states that the next decade is crucial yet the current Climate Change Bill proposes no increase in action until after 2030 (see graph below). 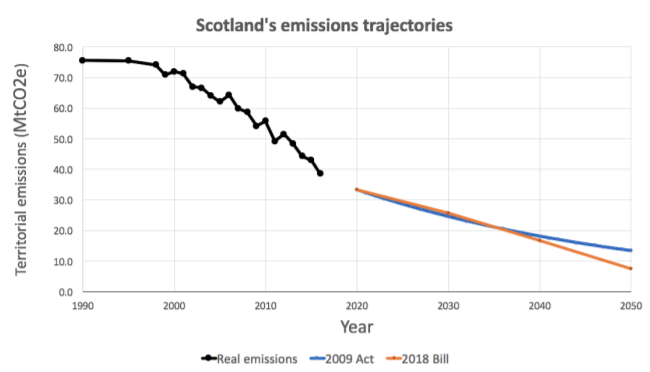 The 80% reduction target for 2030 is also consistent with a ‘Fair Shares’ approach, which says industrialised countries, who have historical responsibility for causing more emissions, should do more towards meeting the 1.5oC temperature limit than countries that have only recently industrialised.

Economic experts have also consistently urged the need for more action to reduce emissions earlier rather than later because it’s cheaper. Urgent action and an 80% target in 2030 will mean that Scotland does its fair share, is more likely to meet a zero 2045 target and mean action is more affordable.

How we get to zero

Setting a target of net zero greenhouse gas emissions by 2045 at the latest was the first of our asks for this campaign. In order to get to zero, we need a roadmap for how we’re going to get there – which is why we also asked the Scottish Government to commit to: